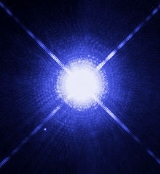 latisha11
What allows a white dwarf to exist in our soloar system?
Save
Cancel
Reply
replied to:  latisha11

Replied to:  What allows a white dwarf to exist in our soloar system?...
It is the stage of the evolution of the star, a final stage. Same analogy with burned wood that became a charcoal later.
Save
Cancel
Reply
replied to:  latisha11

Replied to:  What allows a white dwarf to exist in our soloar system?...
The dicovery of the planet Neptune by the orbit of Uranus has 1/3 of the perturbation of Uranus still unexplained. Mars has evidence for liquid water around 4 billion years ago, that a distant more massive companion to the Sun would produce. The Sirius star system has a 0.98 solar mass white dwarf star in orbit around a 1.8 solar mass main sequence star. The IBEX space probe may have imaged from Earth orbit in neutral atoms the magnetic field of a dark companion to the Sun.
Plug a 1 solar mass white dwarf star into the Uranus orbital calculations used to find the planet Neptune, to get the approximate distance and area of the sky for any white dwarf companion to the Sun. A gas giant planet in orbit around a white dwarf would help to find it by reflected sunlight or by thermal infrared radiation. A Sirius double star system of 4 billion year old white dwarf stars would be farther away from the Sun to fit studies of the orbit of planet Uranus. Obtaining gravitational red shift from an otherwise planetary object would be proof of a white dwarf star.
Save
Cancel
Reply
x