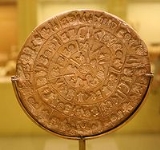 Chazcon
I first read about the Phaistos Disk in the book by Jared Diamond, "Guns, Germs and Steel" and saw the image of the disk there as well. He comments that the disk is apparently to be read from the the outside towards the center, and that it is amazing that the characters fill the available length of 'the spiral' exactly.

My thought about this is, that the object was not made in a disk form and then stamped with characters, but that the characters were stamped on a strip of clay, that was subsequently formed into a spiral and fired.

One may argue that the bending of the strip into a spiral (or disk) would also change the shape of the character stamps in the wet clay. This can be verified.

One can also verify (I believe) that the disk was formed into a disk, stamped and fired, or formed into a strip, stamped, and then curled into a spiral before firing.

Putting myself into the place of the person who created the disk, another way to create it would be to write out (stamp) the message on a long strip of clay, paper, etc. in order to determine what length of strip would be needed for the message. Then you would curl up that strip into a disk and you would be able to determine what diameter of disk you would need to make for that message. At that point you would make the correct diameter disk and then stamp in the message so that the characters would not be deformed by curling up the strip.

If this was the rather advanced form of 'writing' that it appears to be at face value, it is very odd that we have not found more of these disks, some reference to them, etc. in the record. But, it is also possible that only one artifact of this writing system has survived.